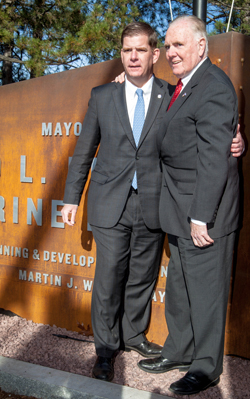 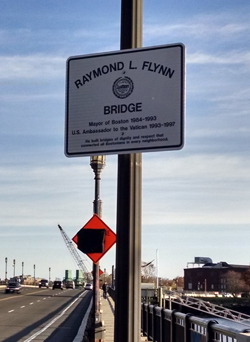 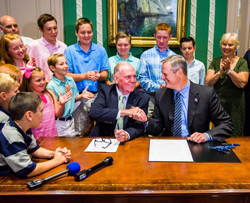 Ray Flynn, one of Boston’s iconic figures over the last half century, continues to receive accolades from city and state officials for his distinguished career as a politician, diplomat and social justice advocate.

Flynn’s connection to the waterfront goes back to his earliest days, when his father, uncle, father-in-law, brother and he all worked on the docks. In 1985, just after he was elected mayor of Boston, Flynn jumpstarted the nascent 191 acre site and created the Marine Industrial Park to support maritime businesses and activities.

Today the Industrial Park, renamed in Flynn’s honor, is home to more than 200 businesses that employ over 3,000 employees.

Moments after the Marine Park was dedicated, Mayor Walsh surprised Flynn and assembled guests by unveiling the newly named Raymond L. Flynn Bridge nearby. It was a fitting honor, since Flynn was known throughout his career as someone who built bridges between neighborhoods, ethnic communities and political adversaries.

“As mayor, Ray Flynn bridged the divide among the neighborhoods of the city, and as Ambassador worked hard to reconcile factions from Northern Ireland to Haiti,” said Mayor Walsh. “He is truly a bridge builder.”

Earlier in the summer, Governor Charlie Baker signed an official Act declaring that Cruiseport Boston operated by Massport be henceforth named the Raymond L. Flynn Cruiseport. Governor Baker signed the decree in his office on August 11, surrounded by Flynn and his extended family, including 17 grandchildren.

Governor Baker called Flynn, “the epitome of what a public servant should be, always a consummate professional, and a dedicated family man.” 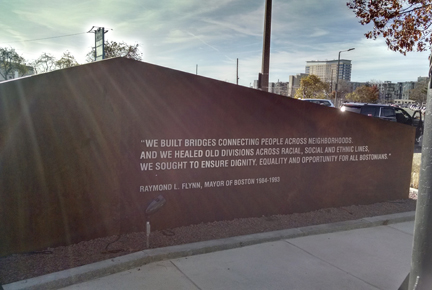